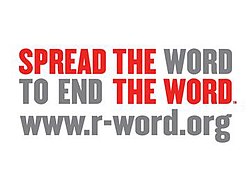 Words matter. They are a reflection of what is in our hearts. Jesus put it this way, “Out of the abundance of the heart the mouth speaks*.”

When I say to my son, “I love you,” my words are expressing my heart and thoughts about him. I say three words that express a world of emotion, hopes, memories, and delight in him as a human being.  My son knows what I mean when he hears or reads those words.

Similarly, when I say, “You are beautiful,” to a friend my words are telling her that she is a kind, gracious, and strong person. My friend knows what my heart believes about her when I say those three words.

Yes, words matter. Whether the words are shared for other people or they are directed at ourselves, they matter. So, what does it mean if I say to someone, “That’s so retarded” or “I am such a retard”? The R-word is being used to communicate stupid, slow, clumsy, or unattractive. What is this communicating to people who have been labeled “mentally retarded” by a doctor? When they hear someone use the R-word they hear themselves being insulted; they hear all people with their medical diagnosis being slammed .

The big problem with using the R-word is that in the origin of the word it was a medical diagnosis. Doctors stamped that word on to people’s medical charts. Somehow a medical diagnosis became part of common vernacular and came to be used as a putdown or an insult.

The R-word needs to disappear. It needs to disappear because words matter and when this word is spoken it matters that it is being used to insult, slam, judge, demean, or criticize.  It matters because there are people who have that medical diagnosis** and use of the word as an insult is a painful insult to them.

**In 2013 the Diagnostic and Statistical Manual officially changed its vocabulary to delete references the diagnosis “mental retardation” and replace it with “intellectual disability” and other terms. Also is 2013 the Federal Register noted legislation to officially replace references to “mental retardation” in government documents with “intellectual disability.”